Science and Health by Mrs. Eddy states (p. 109): "Christian Science reveals incontrovertibly that Mind is All-in-all, that the only realities are the divine Mind and idea. This great fact is not, however, seen to be supported by sensible evidence, until its divine Principle is demonstrated by healing the sick and thus proved absolute and divine. This proof once seen, no other conclusion can be reached."

It is with deep gratitude that I can attest to the truth of these words on the basis of a healing I experienced in Christian Science of what was apparently appendicitis. The condition was never diagnosed by a medical doctor, but for some time I had been experiencing occasional attacks of this nature. Each time, through my own prayers, the condition would abate. I was visiting my parents one afternoon when the symptoms occurred again. My father is a Christian Scientist, and he supported me with his prayers; but as the condition became more severe, prayerful help was requested from a Christian Science practitioner, who lovingly agreed to pray for me.

Send a comment to the editors
NEXT IN THIS ISSUE
Testimony of Healing
I became interested in Christian Science in my late teens, while... 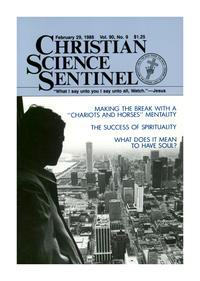