In the Middle Ages many people lived in castles, which were built to keep enemies out. Castles had deep foundations and huge thick walls. Often a large body of water, called a moat, went all around the outside. Usually there was a drawbridge that could be raised and lowered for getting across the moat and into the castle.

At the end of the drawbridge was a gate. The guard at the gate had the most important job of any of the soldiers—to distinguish between a friend and an enemy. The safety of the whole castle could depend on him, for if even one enemy could get within the castle walls, he might be able to let in an army.

Send a comment to the editors
NEXT IN THIS ISSUE
Testimony of Healing
Five days after our second child was born, my husband found... 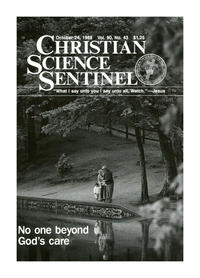