When I became interested in Christian Science, I had been an...

When I became interested in Christian Science, I had been an alcoholic for about sixteen years. I was constantly under the care of a doctor and was also a heavy smoker. Yet I did not see the drinking and smoking as problems. I always thought that the problems were with the world and that I had to have these crutches in order to cope. I had three children and a husband who worked long hours. It was difficult for me to face what appeared to be a great deal of responsibility.

I did not become a student of Christian Science to help myself. We had a child who was having some physical difficulties, and I sought help for the child. I called a Christian Science practitioner and explained to her that I did not know anything about Science but that I wanted to try it. I did not tell her about my problems. She was very loving and asked me to go to the Christian Science Reading Room and borrow copies of the Bible, Science and Health by Mrs. Eddy, and Concordances to these books, which I did.

Send a comment to the editors
NEXT IN THIS ISSUE
Testimony of Healing
During one of the most inspiring experiences of my life, there... 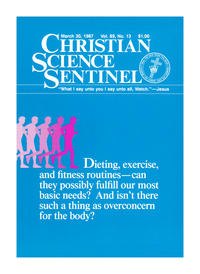