Citizens of His kingdom

To be master of any given language one must be able to think in that language without having to translate ideas word for word. To be a useful citizen of any democratic country, for instance, one must be not only literate but also obedient to its laws.

Christ Jesus perceived citizenship in the heavenly kingdom to be a present possibility. He made it clear through precept and parable that the kingdom of heaven is a state of harmonious consciousness, that it is at hand and within us. See Matt. 4:17; Luke 17:21. Mrs. Eddy, who founded Christian Science on the teachings and example of Christ Jesus, reminds us, "Pilgrim on earth, thy home is heaven; stranger, thou art the guest of God." Science and Health, p. 254 . Every individual has within his own true consciousness his God-given citizenship in this kingdom. This gives him divine authority to express something of its language and to obey its laws, even while walking the earth. As he claims and demonstrates this citizenship, his reflected ability to be useful at all times is unquestionable. 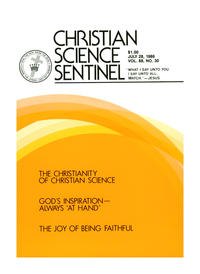