Some thoughts on the sunrise illusion

One morning I was fascinated by the beauty of a sunrise. The more I thought about it, the more interested I became. At the time, my wife and I were visiting the island of Maui in Hawaii. We had decided to see the sunrise from the top of the ten-thousand-foot volcano Haleakala. There were many people there with their eyes concentrated on the spot where the sun was expected to appear. When the edge of that great red ball of fire appeared on the horizon, the joy of the people was apparent. Some called out, "There it is!" As I stood there for a time enjoying that beautiful sunrise, I knew that I was observing an illusion. Also I realized how impossible it would have been in the time before modern astronomy to try to convince anyone that actually the earth was turning.

In Science and Health Mrs. Eddy states: "In viewing the sunrise, one finds that it contradicts the evidence before the senses to believe that the earth is in motion and the sun at rest. As astronomy reverses the human perception of the movement of the solar system, so Christian Science reverses the seeming relation of Soul and body and makes body tributary to Mind." Science and Health, p. 119.

Send a comment to the editors
NEXT IN THIS ISSUE
Poem
What a privilege! 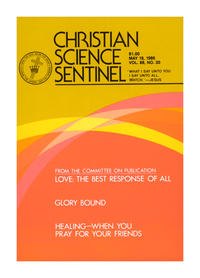