When a centurion sent the Jewish elders to ask Christ Jesus to heal his beloved servant, he recognized a fundamental fact about the relationship of power to the individual. In a second message to the Master he said, "For I also am a man set under authority."  Luke 7:8. Under! The centurion must have realized that his authority over his soldiers represented far more than his own personal power. Since he served the Roman Empire, the power of the empire acted through his word. When he commanded soldiers, he received obedience, not only because he as an individual officer demanded it but because, in any legal order, his authority derived from the emperor. The centurion perceived that Jesus stood in a similar relationship to divine power. Furthermore, because he recognized the divine source of the Master's power, he expected results; he needed no more than the word, and he accepted the healing.

Through his teachings Jesus gave his disciples authority (power) to heal, and furthermore promised that this authority would act through all who accepted, understood, and practiced his teachings. All who obey the Christ and place themselves under God's authority—in obedience to His law—are "set under authority." Whenever anyone speaks in the name (nature) of Christ, the power of God backs up this authority. It doesn't matter who we are—rich or poor, educated or uneducated, young or old, humanly intelligent or unintelligent—if we realize and speak the truth, we are under Truth's authority, and Truth is self-enforcing. 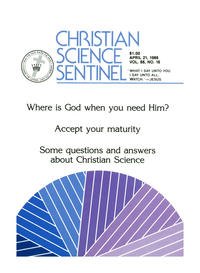