Purifying and uplifting human thought are spiritual stepping-stones to gaining an understanding of the perfection and intelligence of man, made in God's likeness. This was proved to me very clearly in an experience I had while attending college.

A day or so before finals one year, a friend and I went to play racquetball to take a break from studying. While I was playing, something in my back was strained. But I continued to play. The condition got much worse, to the point where I had to stop playing because breathing was difficult. With some help I made it back to the dormitory. Once there I began to study the weekly Bible Lesson from the Christian Science Quarterly.

Send a comment to the editors
NEXT IN THIS ISSUE
Testimony of Healing
I am told that in the early 1900s my aunt was quickly healed... 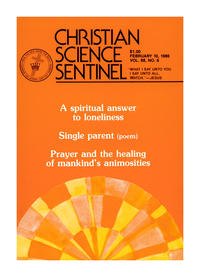