There's often plenty to disturb the peace of a homemaker. An important part of the homemaker's job is to keep those disturbances from disrupting the peace of the home. From a Christian's standpoint, peacemaking must begin with watching one's thoughts, refusing to let evil suggestions or enmity against God abide in one's mental home.

Christ Jesus' command "Watch and pray, that ye enter not into temptation" Matt. 26:41. applies to all. Watching and praying are especially vital to homemakers because their work tends to be with a small group of people. The temptation may come to magnify the virtues and faults of these individuals. This tendency, if unchallenged, would open the possibility for animosity to come at one through channels normally filled with affection; anger and resentment would well up over things that amount to little. For instance, if thought is not watchfully guarded and prayerfully nurtured, a homemaker can become more exasperated each day he or she hangs up clothing that casually decorates bedposts or has to pick up toys and sports equipment carelessly left outdoors. Week after week of soothing feelings hurt in playground disputes and calming complaints over injustices at the office might wear on anyone's sensibilities!

Send a comment to the editors
NEXT IN THIS ISSUE
Editorial
Needed: heroes and heroines 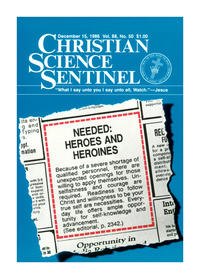