One evening when I approached the door to the settlement house—a center for community-directed public programs—where I worked, I found it guarded by a number of people. As I attempted to enter they began questioning me. What did I want? Where was I going? What was I doing there?

I explained that I lived with my family in the building. One of them remembered that the manager had said the security guard was a student who lived with his wife and baby upstairs. They let me pass and assured me that my family was safe and that we would not be bothered during the "siege" of the building. A racially mixed group had taken over control of the building in order to protest programs that they felt were not adequately directed to their interests and needs. 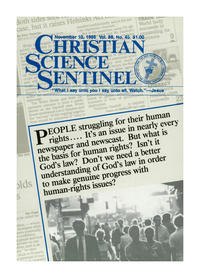