How a spiritual sense of family heals racial prejudice

While growing up I saw much evidence of racial prejudice. The city I lived in had for many years been the setting for confrontations between various racial groups. It had suffered riots and was continually facing violence among young people of different races.

As a teen-ager attending a Christian Science Sunday School, I found the Bible and Science and Health with Key to the Scriptures by Mary Baker Eddy of great benefit in protecting my thought from the violence and divisiveness of racial prejudice. Christian Science, discovered and founded by Mrs. Eddy, teaches us to look beyond prejudice, mistrust, fear, and hatred to God's spiritual creation. In God, divine Love, no discord, divisiveness, or hatred exists. Whether prejudice appears to be a part of others' thinking or harbored in our own, it really is not a part of the loving man created by God. In our true, immortal selfhood, we are reflections of infinite Love. God is the Father-Mother of all, and we all live in His universal family.

The unity of all mankind is clearly expressed in the following words of Mrs. Eddy: "On this basis the brotherhood of all peoples is established; namely, one God, one Mind, and 'Love thy neighbor as thyself,' the basis on which and by which the infinite God, good, the Father-Mother Love, is ours and we are His in divine Science." The First Church of Christ, Scientist, and Miscellany, p. 281.

The spiritual idea of there being one Father-Mother is helpful in healing racial divisiveness. It shows us that family is more than biological ties; it is defined by having Spirit as our common source. Our bond to each other is spiritual and not carnal. "The Spirit itself beareth witness with our spirit, that we are the children of God," Rom. 8:16. confirms Paul. This understanding gives us the opportunity to go beyond the human classifications of black, white, brown, or yellow to the one true classification of man as the spiritual offspring of Love. Thus we unite with the spirit of Paul's declaration "There is neither Jew nor Greek, there is neither bond nor free, there is neither male nor female: for ye are all one in Christ Jesus." Gal. 3:28.

Christ Jesus included all in his healing love. He did not judge according to race, sex, or national origin, but by the willingness to know God. Although he was a member of the Jewish race, he did not believe that only those of his own race were the chosen ones. He recognized the Christly elements in Jews and non-Jews. He taught this lesson when he healed the Roman officer's servant. So strong was the faith of the Roman officer that Jesus marveled and stated that not even in Israel had he found such great faith. To this he added, "And I say unto you, That many shall come from the east and west, and shall sit down with Abraham, and Isaac, and Jacob, in the kingdom of heaven." Matt. 8:11.

The Christ, revealing man's real selfhood, shows that we all reflect Soul, expressing intelligence, universality, and justice. Goodness is a natural quality of God's children and is expressed fully by individual man. Whereas mortals may appear hateful, violent, and prejudiced, this picture is the inversion of man's true identity. Christian Science teaches that man is not a sinful mortal but the spiritual image and likeness of God. The inverted image, or counterfeit mortal, exists only to the illusive mortal, material senses. The Godlike and perfect man is substantial; man exists in Mind and is discerned through spiritual sense. The real man expresses in thought and action the divine nature of Life, Truth, and Love.

Acknowledging the spiritual man we and others really are helps us to uncover and destroy any deprecatory opinions we hold of other social groups or races. The desire to know and accept only one Father-Mother, God, embracing all people, frees us from judging after the flesh in the manner of the Pharisees. It replaces in our hearts the counterfeit mortal with the spiritual image of Soul.

If we would bring healing to our encounters with others, we should not accept the labels of "lazy," "dishonest," "violent," or "nonintelligent," since in reality none of these are qualities of God. Even if an individual has shortcomings, human faults belong to mortal mind and not to divine Mind's ideas. Instead of condemning others according to what the mortal senses say, we can see them as Jesus did—as God's children. By accepting as real only God's attributes and qualities in others, we often free ourselves from our human foibles and protect ourselves from the carnal mind's attacks.

Such protection was proved day after day, when I traveled through what was considered a dangerous ghetto neighborhood. While living off campus and commuting by bus to classes during my undergraduate university days, I had to change buses at a stop located in a dilapidated neighborhood that had a reputation for violence. While waiting for my next bus there, I would pray to know that in God's sight I was not better than any of that neighborhood's residents. They were the chosen children of God, just as I was. They had the same Father-Mother Mind, which took care of them and me. Flesh pigmentation or social class could not separate us or prove to be a motive for hatred or violence. I saw each one as the spiritual and complete reflection of divine Love. I knew that by seeing them as satisfied and loved of God, everyone would be benefited. Their individuality, as well as mine, was in spiritual fact the expression of the one Ego, Soul, and this Ego, I knew, expresses itself in peace, gentleness, and fulfillment. This loving and unprejudiced thinking about the people of this ghetto protected me during the whole year that circumstances obligated me to stop in that neighborhood. Others whom I knew claimed that they had been shot at or robbed while attempting to go through that part of the city.

The understanding of one parent Mind, governing all, also brings freedom and justice to those who may be suffering the lash of prejudice. They can realize that Principle is the source and Ego of all people, and is expressed in fairness, equality, and truth. Hatred and injustice are the carnal mind's claim that there is another power beside infinite Love. When we find ourselves victimized by prejudice and injustice, it is ultimately not persons who are to blame, but the belief in a mind separate from God. Knowing this, we can protect ourselves from reacting with violence, hatred, and revenge. It is mortal mind's pride and egotism that would want to respond to hatred with hatred. We read in James, "Humble yourselves in the sight of the Lord, and he shall lift you up." James 4:10.

Man's spiritual and privileged sonship is not found in either inferiority or superiority of race, sex, or nationality. God, the Bible tells us, "is no respecter of persons," Acts 10:34. that is, of corporeal identity. He is the infinite Father-Mother, Love, who sees only our spiritual identity and loves us all. Understanding this and striving to express God's love to all, regardless of class or race, adjust the human scene and bring justice and fairness into our lives. 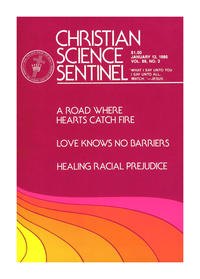