My parents had been students of Christian Science...

My parents had been students of Christian Science for six years when I was born; therefore I was brought up in this teaching from my earliest days. By the time the Second World War began, I had been a pupil in the Sunday School of a branch church for sixteen years. I had also become an active member of that church and had received Christian Science class instruction. Along the way I had studied this Science earnestly and applied its teachings when needs arose. I had always felt grateful for my upbringing in Christian Science, but subsequent events afforded me opportunities to make this teaching really my own.

In the earliest part of the war, and later, while I was serving in the British Army and stationed in London during the severe bombing, I experienced many instances of protection. In the spring of 1941 I was sent to the Mediterranean to join the British forces already on the island of Crete. I arrived there eleven days before the enemy's airborne invasion of that island.

Send a comment to the editors
NEXT IN THIS ISSUE
Testimony of Healing
I have delayed too long in expressing my gratitude in writing... 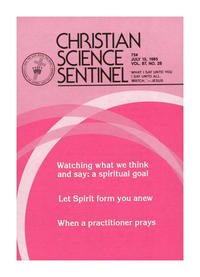