I attended a Christian Science Sunday School while I was growing up, and I have also been blessed in my marriage to a Christian Scientist. But this does not say that there have not been testing times. My husband served many years as an officer in the Army, so we sometimes found ourselves a long way from church and family. We have relied on God—through the teachings of Christian Science—to meet our needs, and He has never failed.

When our elder daughter was less than eighteen months old, she became quite ill. She lost weight and, at one point, was not able to hold down food for several days. Although we had been having prayerful help from a Christian Science practitioner throughout this time, I felt isolated and afraid. (The practitioner lived in a distant city and my husband's military requirements had caused him to be away from home.)

Send a comment to the editors
NEXT IN THIS ISSUE
Testimony of Healing
I hope this testimony brings joy and blessing to those who... 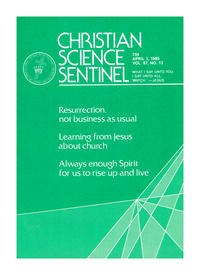