Drugs: man is not addicted or attracted to evil!

One young man I know spent many years of desperate and destructive unhappiness, hating himself and turning to drugs to find release. "I was looking for heaven—and for myself," he later told me.

Eventually, he met the brother of a friend, a man who expressed both strength and love. The brother was a student of Christian Science, and he told the young man about this truth. Within a few weeks the young man had turned to prayer. Loving the new view of God and man that Christian Science provides, he won his battle and emerged free. He gave up drugs, and he remains free from them today—a much happier and more unselfish individual. 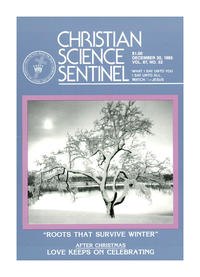