Everyone is interested in plenty. Plenty of health, plenty in the bank, plenty of good, plenty of friends. Yet so often lack stares us in the face instead. Matter-based thinking can tell us little else. Its very nature is limitation. Why not let Scriptural truth come to our rescue? The Bible declares God's outpouring bounty to be effortless. "Thou openest thine hand," we read in Psalms, "and satisfiest the desire of every living thing." Ps. 145:16.

A widow, whose name isn't even recorded, was facing a traumatic situation. See II Kings 4:1-7 . The creditor had come to take her two sons as bondmen. In this extremity, the Bible tells us, she turned to the prophet Elisha, the man of God, for help. He asked her, "What hast thou in the house?" Only a pot of oil, she told him. He instructed her to borrow empty vessels from neighbors, and then to pour out the oil. She did until all the vessels were filled. The money from selling the oil paid her debt—with some left over to live on. 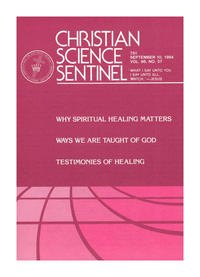