The leading editorial in this issue of the Sentinel refers to a television series first presented in England and since then in several other countries. Because of the conspicuous and controversial part Lady Astor played in British life earlier in the century, this series received considerable comment in the letter columns of newspapers in the United Kingdom and Ireland. The Christian Science Committee on Publication was able to use this opportunity to correct some widely held misconceptions of Christian Science. Two typical corrective letters are printed below. 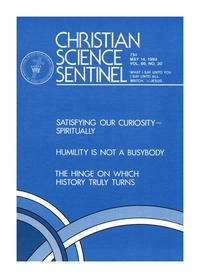