I am ever so grateful for the many proofs I have had of God's...

I am ever so grateful for the many proofs I have had of God's loving care and protection. At one o'clock on a Monday morning, I was wakened by someone calling "fire!" It was a windy night, and as I stepped into the hallway, white with smoke, my apartment door slammed shut and locked. I called for help but there was no response. Then I started to walk to my right (toward the back stairway), but I could not continue. It was as though something was pulling me to the left. (It was later determined that had I continued toward the back stairs, I would have walked right into the flames.)

As I tried to escape I fell down three times, each time feeling overcome by smoke. But in every case I was able to pick myself up and continue. Finally I reached the front stairway and ran down the four flights to the ground level. By then the fire department had arrived, and the fire, which had started in the apartment below mine, was quickly brought under control. No one had been hurt.

Send a comment to the editors
NEXT IN THIS ISSUE
Testimony of Healing
My parents became students of Christian Science when I was attending... 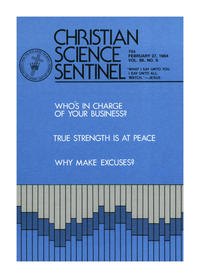