The importance of an accurate beginning

"It doesn't look right. The problem occurred in the early stage of your sculpture. Try again. This time be careful about the proportions in the beginning!"

These words of my art professor helped me when I was endeavoring to complete my first sculpture. It was supposed to be a Labrador retriever; it looked like a St. Bernard! I had been diligently working with the wrappings and plaster hoping to create some resemblance to a Labrador. After my professor's critique, I realized that I had been attempting to correct a misrepresentation by creating a better misrepresentation. This approach was all wrong. It would be impossible for the sculpture ever to be exact. Only by my beginning again and accurately proportioning the skeletal framework could the dog be realistically depicted. 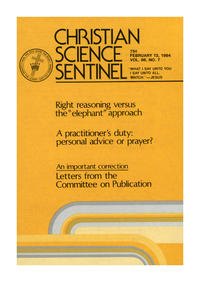