"Listen to the Mocking Bird"

Many of you will recognize the title of this article as a well-known old song. But by taking the suggestion literally, I recently enjoyed a musical concert and learned a valuable lesson at the same time.

Until I moved to another area, I was unfamiliar with the mockingbird, but its song quickly made it something special to me. The big oak trees outside of my apartment seem to be a favorite concert stage of the birds, so I'm often the recipient of their large and varied repertoire. One morning as I was doing some chores, street noises coming in the open windows were unusually annoying. Then suddenly the clear, musical voice of a mockingbird rose above the din, and I stopped my work to listen. His song was so exuberant I was inspired to capture it on my tape recorder—and the playback was illuminating. 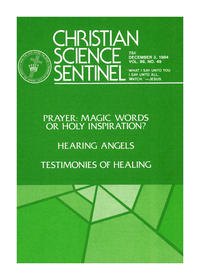