The textbook and a new life

No prayer, no church, no faith in God .... A man was describing the condition in which he found himself after years of drifting away from his earlier religious inclinations.

He said that when he had ceased to turn to the Father for direction in his life, he had instead "looked to the world for that which it never has and never can give,—health, peace, and joy." He eventually reached a low point where there was discord at home and his wife was chronically ill. He felt that his spiritual sense had become deadened. 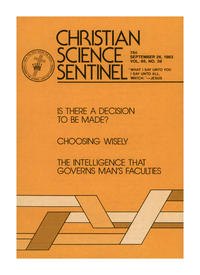