Christian Science has made such an impact on my life that my...

Christian Science has made such an impact on my life that my gratitude is boundless. My first glimpse of spiritual truth occurred about forty-five years ago when I was healed of grief after my mother's passing. This healing took place while I was listening to a Christian Science lecture in a branch church in New York City. I felt a wonderful sense of peace when the lecturer spoke of the fatherhood and motherhood of God, and I was freed from sorrow.

A little later on, before my first child was born, I was healed of constipation of many years' standing. (I had then been studying this Science for about six months.) Each night before retiring I would take a spoonful of mineral oil. However, one night I became so absorbed in reading Science and Health by Mrs. Eddy that I forgot to take the oil. I have never taken it since, nor have I felt a need for it. The oil I now use is defined on page 592 of Science and Health: "Oil. Consecration; charity; gentleness; prayer; heavenly inspiration."

Send a comment to the editors
NEXT IN THIS ISSUE
Testimony of Healing
Several years ago, I was faced with a personal crisis that completely... 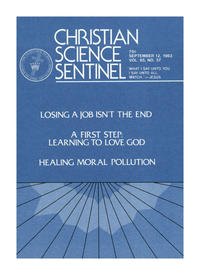