Several years ago my first testimony was published in the Sentinel

Several years ago my first testimony was published in the Sentinel. Since then so much has unfolded in the way of blessings and healings, attributable to reliance upon God through Christian Science, that I feel impelled to submit a second.

The post-World War II period, up to some twelve years ago, I spent in the nursing profession. I was employed in a local geriatric hospital where I attained senior status. Being chiefly concerned with the cleanliness and comfort of patients, I felt this did not unduly conflict with my convictions regarding Christian Science. I embraced Science shortly after the war—a step that resulted in wonderful healings of a host of physical and mental complaints that had almost reduced me to a human wreck. Suicide had even been contemplated. Later, my desire to progress in the demonstration of Christian Science prompted a deeper study of the subject. Eventually a situation arose at work that involved my administering drugs. This demanded that I take a radical stand for Science. I saw clearly that it was impractical, and actually dishonest, to profess my disbelief in material medicine while continuing to serve in that profession. I therefore resigned, even though this meant forfeiting a good pension and inviting the concern and fear of those close to me. I will always be grateful, however, for my dear wife's courageous support throughout this period. 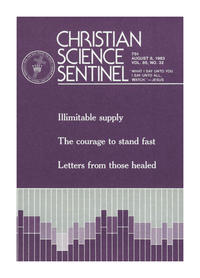