Although I lived for many years in a home where Christian Science...

Although I lived for many years in a home where Christian Science was practiced (as my wife had been a Scientist since her childhood), I had never joined the church. But after the incident I am about to relate, I did join the local branch Church of Christ, Scientist, and later The Mother Church, and I have been greatly blessed and protected as a result.

One day about thirty-five years ago, I went on a hiking and fishing trip with a friend in a wilderness river area of southern California. We had arrived in the vicinity of the fishing stream about nine o'clock in the morning. After leaving our car at the end of the road and hiking about ten miles over a trail to the stream, my buddy went downstream and I started upstream. We were to meet in midafternoon. After fishing for a short while, I found the way up the stream bed almost impossible because of the large boulders and a waterfall blocking my way. Yet I kept on going and had almost reached the top of the climb around the falls when my foot slipped and I fell about forty feet down the slick channel. I hit some protruding rocks on the way down and landed in a pool of water.

Send a comment to the editors
NEXT IN THIS ISSUE
Testimony of Healing
I was widowed during the Second World War, and there were... 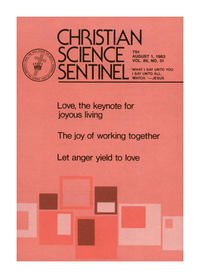