When our son was at the age of five, he developed...

When our son was at the age of five, he developed what seemed to be pneumonia. Almost simultaneously there appeared symptoms of mastoiditis. (Christian Scientists don't diagnose, but they, as other parents, are often exposed to descriptions of conditions that other children have experienced.)

At the time, both my wife and I had for many years been members of The Mother Church, The First Church of Christ, Scientist, in Boston, Massachusetts. In addition we had been members, at different times, in several branch churches, where we had served in numerous capacities. We had been the recipients of a great many healings through the consistent practice of the teachings of Christian Science. And in facing the illness of our son, we were unified in our confidence that God, who is "no respecter of persons" (Acts 10:34), would not desert us in our hour of need.

Send a comment to the editors
NEXT IN THIS ISSUE
Testimony of Healing
One healing I had was when I pinched my fingers in the car... 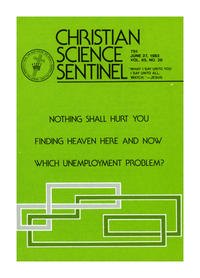