Years ago Christian Science healed my mother, a...

Years ago Christian Science healed my mother, a semi-invalid suffering from arthritis, who had small children to care for. (Her health restored, my mother lived to be 104.) After her wonderful healing, my mother had been studying Christian Science only a few years when, at the age of five, I was carried home unconscious one day. I had been run over by a wagon. My pelvic bone was broken, and I was badly crushed. A Christian Science practitioner from another state was in the area at the time, and my mother called her. Although we had not previously met the practitioner, she came and stayed with us over a week, praying for me night and day. This was the first of many severe testing times my mother had, and Christian Science never once failed to give her the victory. By the time I was ready to start school, I was well and strong, and there were no aftereffects of the injury.

Later on, just before I finished elementary school, I was saved from drowning. I was on a lake in a small boat with some of my classmates when the boat turned over. I couldn't swim; neither were the others good swimmers, and we were at the deep end of the lake. At about that time my mother, who was home, felt the need to pray for my protection. She immediately turned to the Bible, and to Science and Health with Key to the Scriptures by Mary Baker Eddy for help to conquer fear. I feel that all of us were saved as a result of her prayer, for our rescue was considered by those who arrived at the scene to be a miracle.

Send a comment to the editors
NEXT IN THIS ISSUE
Testimony of Healing
What a joy it is to be healed by the one and only Christ,... 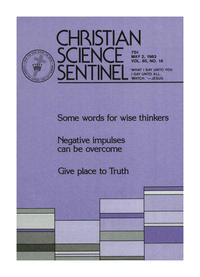