The first time I heard of Christian Science was when, as a young...

The first time I heard of Christian Science was when, as a young girl, I listened to my beloved father read some derogatory statements about it from a newspaper. Later, at the age of nineteen, I was presented with a copy of the Christian Science textbook—Science and Health by Mrs. Eddy. I handed it straight back because I believed it to be nothing but twaddle. However, a character change for the better, which I had witnessed in the person who presented the book to me, made me think there must be something to Christian Science. So I asked for the book back again. Now I just could not put it down; I simply drank in its healing message! I wanted to shout my gratitude from the housetops! But wisdom bade me keep silent and live the Truth instead.

Since that time the whole family has been benefited by the study of Science—there have been character improvements, my grandmother was greatly comforted, and my mother was healed of what might be called a gradual mental degeneracy. My mother was also healed of "quiet spells"—periods when she would not speak to anybody. Afterwards she thanked me for releasing her from this false trait. One sister was healed instantaneously of blinding headaches; the other had a quick healing of chronic constipation and another time of a fractured bone in her foot. One brother was healed of shingles, and the other continues to derive much joy from his study of Christian Science. 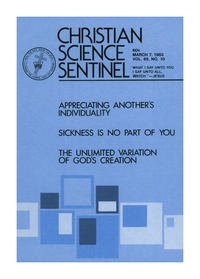