Approximately nineteen years ago I became acquainted with Christian Science. At that time I was sick in body and soul—my clear view of Truth was clouded. I had several operations involving my gallbladder and a tumor in my breast, plus an operation to remove my appendix. After these operations I weighed a little over eighty pounds and was without inner stability or faith. In fact, I had given up hope of recovery. Then I had a complete breakdown.

The second half of that year (after a brief interruption) I was under intense neurological care. My husband was called in to see the doctor for a last appointment, during which a decision was to be made about the mental hospital I should be committed to. When I found out about this, I asked the doctor for a slight postponement of the decision, which she granted. (I had quietly begun a study of Christian Science, and small glimpses of Bible truths were very gently awakening hope of recovery in me.) There followed a very difficult road, for many discouragements were yet to be overcome: erroneous notions had become embedded in my thinking, and instead of pressing forward I made the great mistake of looking back. Doing this made the ghost of hopeless illness seem very real to me. It also repeatedly caused me to feel self-pity and bitterness about my supposed lot in life. Despite all of these obstacles, however, I continued to read the textbook, Science and Health with Key to the Scriptures by Mary Baker Eddy. I had to do it inconspicuously though, because, after all, I was considered mentally ill.

Send a comment to the editors
NEXT IN THIS ISSUE
Testimony of Healing
I feel compelled to write this testimony in order to show that... 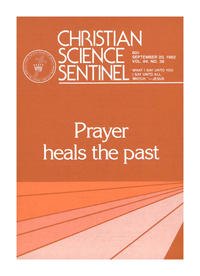