Over a period of twenty-one months, in 1978 and 1979, I had an opportunity to prove, "Consciousness constructs a better body when faith in matter has been conquered" (Science and Health by Mrs. Eddy, p. 425). The spiritual facts of being had to be acknowledged and lovingly accepted.

It all started during the professional cleaning of my teeth, when the dentist insisted that he had identified a serious condition called periodontal disease. In his opinion, immediate extensive oral surgery and intensive frequent treatment would be required to halt further deterioration. He also stated that the disease was so severe and the tissues so badly damaged that he could not assure me whether even these procedures would be effective. I was stunned. At his insistence I made an appointment for the following week, at which time the dental work would begin.

Send a comment to the editors
NEXT IN THIS ISSUE
Testimony of Healing
One year while I was living in the Midwest, the first snow of the... 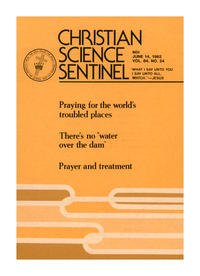