The following experience can be likened to Jesus' parable in...

The following experience can be likened to Jesus' parable in Luke (11:5-10) of the man who persistently knocks at his friend's door seeking loaves of bread. The story continues: "Though he will not rise and give him, because he is his friend, yet because of his importunity he will rise and give him as many as he needeth. ... For every one that asketh receiveth; and he that seeketh findeth; and to him that knocketh it shall be opened."

The many problems that have confronted me down the years have all been healed—some quickly, others after much consecrated prayer and study. This particular healing came after nearly a decade of persistent prayerful effort—of sticking to the Truth. Had it been diagnosed, the difficulty probably would have been called a severe kidney infection. At moments the pressure and pain were excruciating. From time to time I had fine help from different Christian Science practitioners and would gain some relief. But then the problem would return.

Send a comment to the editors
NEXT IN THIS ISSUE
Testimony of Healing
The Bible reveals the law of God, the law of Life 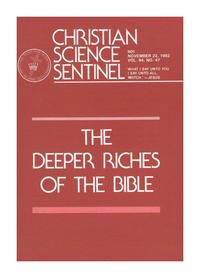