Thought-provoking spiritual perceptions on the role of democracy in branch Churches of Christ, Scientist, are provided in this new leaflet on an important subject. It will be published in 13 languages.

The articles included in the English leaflet are: the editorial from the February 1982 issue of The Christian Science Journal by DeWitt John, entitled "Democracy in branch churches" and "Church elections: a Christian Science demonstration" by Donald R. Rippberger, first published in the October 1976 Journal. The German translation will include the same articles. The other translations will include the editorial by Mr. John and "The democracy of prayer" by Benjamin Pray, first published in the July 1951 issue of the Journal and reprinted in the Christian Science Sentinel of February 20, 1978. 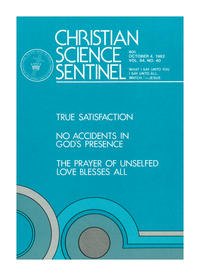