One year seven white Chinese geese spent the summer in our large backyard. They waddled happily about nibbling grasses or napped together in the cool shade of a tall willow. A single electrified wire eight to ten inches off the ground was all that kept them restricted. They had quickly learned not to touch the wire. After several weeks we decided to save electricity and experiment with the power off. The geese stayed within the pen. Ignorant that the wire was now powerless, the birds were confined solely by mistaken belief!

As I observed the scene, I couldn't help comparing humanity to those geese. Too often we let mistaken beliefs fence us in. A limited sense of our ability may keep us from reaching some deeply cherished but perhaps far-distant goal. Too often we let the belief that we lack courage, initiative, intelligence, or talent put up walls around us. 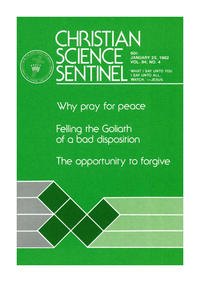