Years ago, for no apparent reason, I became very depressed

Years ago, for no apparent reason, I became very depressed. Shortly thereafter, a breathing problem developed which rapidly got worse, and I was confined to bed, too weak to move or speak. Ultimately one lung ceased to work, and the other one only partially functioned.

One night it appeared I was passing on, and the Christian Science practitioner that had been praying for me was informed. All night I clung to the thought that God was my Life. This was the turning point, and within a few months I was leading a fairly normal life again. 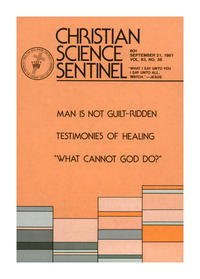