My freshman year in college was the first real exposure I had to...

My freshman year in college was the first real exposure I had to hard liquor and drugs. Having been raised with Christian Science and coming from a loving, supportive family, I had learned to rely on God during my childhood and high-school years.

Suddenly, at college the word "party" had a new meaning. Not only would students join together in conversation, but sharing alcoholic beverages and taking drugs were also considered part of this social activity. I soon found myself experimenting with various forms of liquor in response to tremendous pressure from my dormitory neighbors. I could not, however, be persuaded to experiment with drugs, since I was aware of the severe effects that could result from a dosage—large or small.

Send a comment to the editors
NEXT IN THIS ISSUE
Testimony of Healing
As a young woman I saw Christian Science heal my mother of... 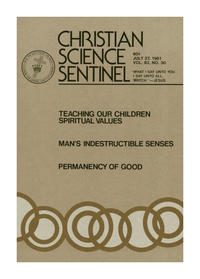