Two summers ago, while I was working at a camp for Christian Scientists,...

Two summers ago, while I was working at a camp for Christian Scientists, I had an opportunity to witness the healing power of divine Love. As a counselor, I was responsible for several camp activities, including the charge of seventeen teen-age girls. My motives to give, and to exercise good, seemed to be right ones. However, I had wrongly assumed that I was personally responsible for all this human activity. One day about midseason, I was feeling so frustrated and fatigued, I broke down into tears while reprimanding "my" campers.

Later the same day, when some of the counselors went waterskiing, I insisted on joining them, although I was really tired. While skiing, I took quite a fall and hit my head. When friends in the boat asked if they could help me, instead of letting go and accepting their aid, I willfully replied that I was going to ski in. By the time I reached the shore I felt very ill. In a great deal of pain, and semiconscious, I finally, gratefully, accepted the support and love of those around me. A Christian Science practitioner was called. Later, family members came to visit, and some campers sang hymns from the Christian Science Hymnal to me. What a humble revelation this manifestation of Love was. And all I had to do was yield to it, not willfully try to exercise it.

Send a comment to the editors
NEXT IN THIS ISSUE
Testimony of Healing
When I was married (over fifty years ago), our lives seemed to... 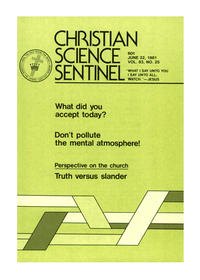