In an issue of the Sentinel published years ago, there is a testimony...

In an issue of the Sentinel published years ago, there is a testimony written by my mother. She tells about the time my six-year-old sister was stricken with typhoid fever. After the child had been unconscious for several days, there was a medical prognosis of severe brain damage. The doctor on the case told my mother that the youngster's trouble was beyond the reach of all human power. Out of desperation my mother decided to call a Christian Science practitioner. Within four days my sister was sitting up in bed and playing. She regained her complete health and lived a normal life. Later she became a member of The Mother Church and was a longtime active member of a branch church.

My mother raised three daughters in Christian Science, and through the years up to the present I have seen numerous healings result from total reliance on this teaching. Mrs. Eddy states in the textbook (Science and Health, p. 167), "Only through radical reliance on Truth can scientific healing power be realized."

Send a comment to the editors
NEXT IN THIS ISSUE
Testimony of Healing
Today I played golf!—the final proof that a complete healing... 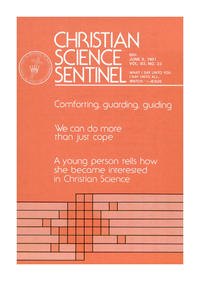