I was raised in Christian Science and during childhood was free...

I was raised in Christian Science and during childhood was free from serious illness. I was never absent from classes, even in college. However, while I was serving in the armed forces during the Second World War, the need to pray for myself daily became increasingly apparent.

Up to that time I had always attended a Christian Science Sunday School and read the Bible Lesson in the Christian Science Quarterly. But while I was overseas serving in a combat zone, I fell away from these regular activities. And except for an occasional scramble to read the Bible and Science and Health by Mrs. Eddy, I did little to advance myself spiritually. 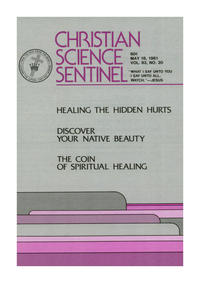