"Nonsense!" he sharply retorted. "Such stupidity!" I thought. My boss and I were locked in conflict. Days of sporadic discussions had hardened our positions. He was obviously wrong and too stubborn to admit it. Ah, but I still could make one last effort. He always quietly pondered reasonable memos. So I gave him one. And he almost fired me on the spot. But just as his anger was reaching that zenith, something happened to my thinking.

Mrs. Eddy says in Science and Health, "The corporeal senses are the only source of evil or error." She continues further on: "Outside the material sense of things, all is harmony. A wrong sense of God, man, and creation is non-sense, want of sense." Science and Health, p. 489. Now, from that standpoint, no wonder my situation didn't make any sense. It was constituted of an awful lot of "non-sense": self-righteousness, self-will, basic material-mindedness! I had generously attempted to endow both my boss and myself with something that didn't exist: a mind apart from God, divine Mind, and this false mind's concomitant, material sense. Speaking of "want of sense"!

Send a comment to the editors
NEXT IN THIS ISSUE
Article
Expected: a changed standpoint 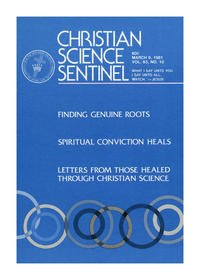