Several years ago we traveled through many countries of Europe...

Several years ago we traveled through many countries of Europe on an extended trip. In one city, as we were leaving a restaurant, I was seized with a severe abdominal pain. I barely made it back to the hotel, and then only by pondering over and over again "the scientific statement of being" from Science and Health by Mrs. Eddy. It opens with these words (p. 468): "There is no life, truth, intelligence, nor substance in matter. All is infinite Mind and its infinite manifestation, for God is All-in-all."

In the hotel room I reached for a copy of The Christian Science Journal, which I always carry with me during travel. From the listing of Christian Science practitioners in the back, I chose the name of someone who lived in that city. Because I could barely move, my wife agreed to go down to the phones in the lobby and call this woman. Meanwhile I continued to pray for myself the best I could under the circumstances. Mostly, I thought about "the scientific statement of being," since the pain was such that I could concentrate on little else. Finally I had to practically shout its truths, which had been of super help on many previous occasions. 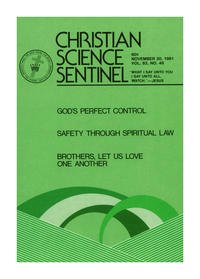