According to the domino theory, each lined-up domino is dependent on the next. When one goes, all go. In our actual selfhood, we are not like a domino, not a mortal dependent on mortals around us for our stability or any good thing. The real man is as infinite as is God. Man is not self-dependent but has being because God is the Supreme Being. God is self-dependent, including all He needs for being what He is. Here is a succinct summing up of the situation: "All substance, intelligence, wisdom, being, immortality, cause, and effect belong to God. These are His attributes, the eternal manifestations of the infinite divine Principle, Love. No wisdom is wise but His wisdom; no truth is true, no love is lovely, no life is Life but the divine; no good is, but the good God bestows." Science and Health with Key to the Scriptures, p. 275; These are the words of Mary Baker Eddy, the Discoverer of Christian Science.

God doesn't depend on matter for being. Neither does the universe—including man—which manifests God, depend on matter for being. Man exists totally free from matter because, in absolute terms, there is no matter in the allness of Spirit. Matter is dependent for its claims to reality on our human concession to it. Again, the real man, dependent on God for intelligence, has no capacity to make concessions to matter. Matter has no intelligence or substance to claim the capacity to do anything or be anything to which we concede—it isn't a something we would concede to. 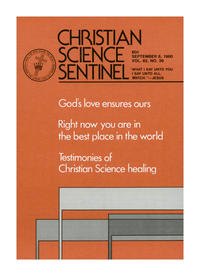