I am happy to have been brought up in a Christian family atmosphere by parents who were active, devoted members of an orthodox church. But when my mother passed on after a painful illness, I could not accept what I had been taught—that sickness and death were the will of God. A little earlier a friend had brought Christian Science to my notice. Seeing that this Science emphasizes the wholly good nature of God, which clearly reverses the belief that He sends evil as well as good to His children, I began regular study of the Bible Lesson published in the Christian Science Quarterly.

A few years earlier I had contracted a skin complaint to which athletes are thought to be prone. The doctor who treated me warned that the condition would recur every summer, and it did. When it appeared in the summer after I'd commenced study of the Bible Lesson, I felt that my understanding of Science was too slight to rely on its truths for healing. So I applied the old medicaments. After some weeks it seemed that the attack was over; then the rash resurfaced in full force. This brought me up with a jolt! I realized that I was being disobedient to the standard of Christian Science, whose teachings I was trying to follow. It was obvious that full reliance on spiritual means for healing was requisite. As Christ Jesus declared (Matt. 6:24): "No man can serve two masters: for either he will hate the one, and love the other; or else he will hold to the one, and despise the other. Ye cannot serve God and mammon."

Send a comment to the editors
NEXT IN THIS ISSUE
Testimony of Healing
"I asked my mother, 'Why did God make poison oak?'" 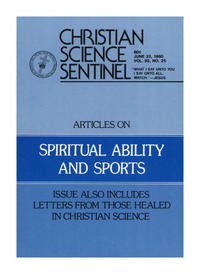