Stuck in the middle?

Suppose a ship steams out to sea, but halfway across the ocean the captain orders the engines shut down and allows the vessel to drift, hoping that sooner or later the prevailing winds and currents will bring him to his destination.

In a way, middle age may seem to some like a time to drift. Perhaps one is tempted to sit back when he has achieved the goals of his earlier labors and is still vigorous enough to enjoy the good things he has earned. The problem with accepting this enticing package called middle age is that in doing so we are also accepting the belief that soon these golden, middle years will begin to dim, and we will slowly slide down from this zenith of fruition and happiness into the grave. Rather than pause in a comfortable state of self-satisfaction, we should work harder than ever during this mid-ocean period of human existence, not for more material success or possessions or a better human situation, but for more spiritual understanding of what man and life really are.

Send a comment to the editors
NEXT IN THIS ISSUE
Article
Why read The Christian Science Monitor? 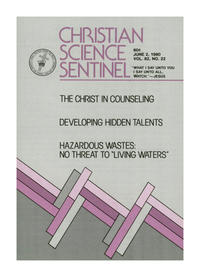