Inspired by the anticipation that my experience might be of...

Inspired by the anticipation that my experience might be of benefit to others, I give this testimony, with reverence to God and gratitude for Christ Jesus, the Way-shower, and for Mary Baker Eddy, without whose immortal discovery, Christian Science, I should not have been what I am now.

Over eleven years ago I was taken as a patient to one of Manila's hospitals. Following a thorough diagnosis and clinical test, I was told that I was suffering from a malignant growth in my throat. I became very fearful and was not able to stand, walk, or to do all the things I would normally do. Since there was no help, I became reluctant to take anything material that the doctors prescribed. The case was pronounced incurable.

Send a comment to the editors
NEXT IN THIS ISSUE
Testimony of Healing
My healings through Christian Science include those of sciatica,... 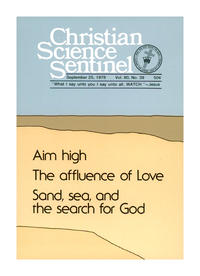