I started studying Christian Science thirteen years ago, and I...

I started studying Christian Science thirteen years ago, and I have thanked God over and over for having found it. I was first introduced to Christian Science by a dear aunt, who gave me the biography The Life of Mary Baker Eddy by Sibyl Wilbur, as well as some issues of The Christian Science Journal and the Christian Science Sentinel. But I put this literature away and did not refer to it until almost seven years later, even though I had a need for it.

After this lapse of time I was hospitalized for an operation, and four months later I underwent surgery again. I was also told that I was anemic, and I was taking four different kinds of medicine. Even though the reports of the outcome of both operations were good, I felt my health was going downhill. 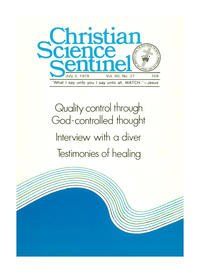