I should like to express my deep-felt gratitude for a healing...

I should like to express my deep-felt gratitude for a healing which took place over a period of about three years. I was brought up in Christian Science and had always turned to it to solve my problems. But when an internal bleeding condition did not stop after several months, I consulted a medical doctor. In concern, he told me I should go to the hospital immediately for an operation. He expressed so much fear I became afraid myself.

But that same day a friend urged me to get in touch with a Christian Science practitioner before going ahead with the operation. The practitioner agreed to give treatment through prayer, provided I cancel the appointment for the operation, which I did. 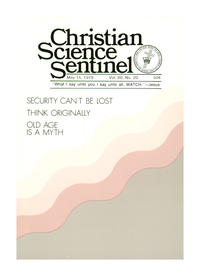