Forgiveness is not only salutary to the unpleasant situation, but it is mandatory to the furtherance of spiritual growth. We need to forgive because we need to know man as God knows him, as God made him—perfect, upright, and spiritual. Man is not mortal or material. The supreme example of this kind of forgiveness was shown by Christ Jesus when he was being crucified. He was willing to forgive his antagonists even in the midst of their most concentrated hatred. He understood the real man to be spiritual, separate from evil and hatred. His words at the time of the crucifixion, "Father, forgive them; for they know not what they do,"1 indicate that he wouldn't allow a mortal concept of manhood to alter his viewpoint. 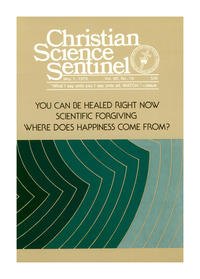