At the age of seven I was adopted by a couple who were students...

At the age of seven I was adopted by a couple who were students of Christian Science. This was my first contact with this Science. (I had been in an orphanage in England prior to my adoption.) I will always be grateful to these consecrated students for bringing me up in a home and background of Christian Science. Soon after I joined them I was quickly healed of measles. Schooling was also a problem to be faced at this time. I did not know my alphabet, nor was I able to read or write at eight years of age. Through my parents' clear realization that Mind is the source of intelligence, and that I, as an idea of God, reflected intelligence, I was able to cope with the work and reach the standard for my age-group.

After schooling it became evident that I was suited to an outdoor life. I emigrated to Australia at the age of sixteen. I worked on sheep and cattle stations and dairy farms. However, worldly things overtook me, and I began smoking and drinking. It was not until I came back to England a few years later that I became dissatisfied with worldly ways and started to attend a Church of Christ, Scientist, again. Soon, with the support of my parents, I was able to overcome the smoking and drinking habits. I saw clearly, through my study of Science and Health by Mrs. Eddy, that man is the image of God and reflects Life, Truth, and Love. Seeing that in my real being as God's idea I reflect Him, I felt satisfied. Drinking and smoking left me, and I have had no desire for them since. 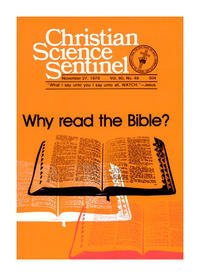