"Heal me, O Lord, and I shall be healed; save me, and I shall be saved: for thou art my praise" (Jer. 17: 14). My first healing in Christian Science occurred while I was living in the southwestern desert of the United States, where I had been sent by physicians. I had been ill with recurrent lung trouble over a period of many years. I was told by the physicians that I would be a semi-invalid for the remainder of my life.

A friend introduced me to Christian Science and invited me to attend a Wednesday evening testimony meeting at a nearby Church of Christ, Scientist. Due to the fact that I was ill with a lung infection and wanted to be healed, I arose, dressed, and attended the meeting. When I left the church after the service, it was with a feeling of great exaltation. I felt a heavy burden had been lifted from me and realized I had been healed of the lung disease. I attribute this healing to the statements of truth read from the Bible and from Science and Health by Mrs. Eddy at this church meeting, to my receptivity to Christian Science, and to my willingness to be healed. 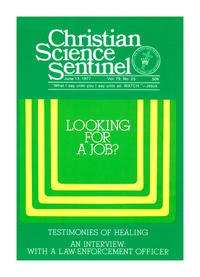