About eight years ago, after a very unhappy personal experience,...

About eight years ago, after a very unhappy personal experience, one of my sons and I set out on a twelve-hundred-mile move, with the other two children to follow later. About fifty miles after our start, we were involved in an automobile accident in which the car was damaged beyond repair. I was unconscious, and my son and I were taken by ambulance to a hospital in the city from which we had started. My son's injuries were not serious, and he was out of the hospital in a day or two.

Twelve hours after the accident I regained consciousness, completely unaware of what had happened. I learned later that I had been X-rayed. My back was broken in two places; there were predictions that I would never walk, and that there was a possibility that I could not again function fully as a human being. In addition, I was having double vision. Gratefully I also learned that a friend, who was a Christian Scientist, had been allowed to see me, and that she had read the Lesson-Sermon from the Christian Science Quarterly to me.

Send a comment to the editors
NEXT IN THIS ISSUE
Testimony of Healing
The love and care of our Father-Mother God for His children... 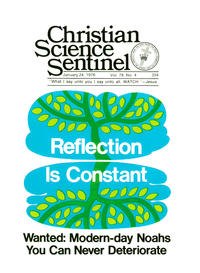