Tobacco leaves seem fragile objects to dominate men and women. Yet when they are dried, processed, and packaged they are often advertised as having the ability to give us all kinds of benefits. On this basis they are represented as having amazing power to provide mortals with comfort, peace, satisfaction, and the ability to think clearly, even to the point of hypnotizing people into believing tobacco is indispensable to personal well-being. But this is a fallacy.

There is one particular worm that feeds and thrives on the living tobacco plant, but it is an ugly creature—even "loathsome" as Mary Baker Eddy has described it. "Puffing the obnoxious fumes of tobacco, or chewing a leaf naturally attractive to no creature except a loathsome worm, is at least disgusting," Science and Health with Key to the Scriptures, p. 407; writes the Discoverer and Founder of Christian Science. And many tobacco users agree with her candid summation. 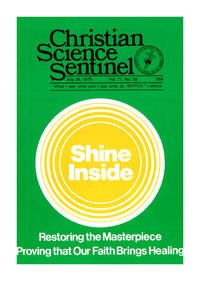