Are You Finding Satisfaction?

Three people—a worried business executive, a frustrated homemaker, and a lonely grandmother—are struggling with problems. These problems may seem divergent, but they are actually the same. All are feeling the "unsatisfied human craving" Mrs. Eddy refers to in a passage in Science and Health: "A mortal, corporeal, or finite conception of God cannot embrace the glories of limitless, incorporeal Life and Love. Hence the unsatisfied human craving for something better, higher, holier, than is afforded by a material belief in a physical God and man." Science and Health, p. 258;

Dissatisfaction often throws up a smoke screen of side issues, and one can be sidetracked from the basic issue of the illusiveness and dissatisfaction of mortal existence. In each case we need to challenge mortal belief with the truth that the man God made is divinely endowed with all good and with the capability to manifest it. One may think that satisfaction can be found merely in finding human answers to problems in business, to fatigue and monotony in the home, or to having plenty of time but no way to fill it. But fundamentally what needs to be corrected is the false belief that man is or can be separated from the infinite goodness of God. 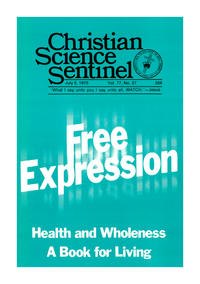