In a court of law an accused person may plead guilty or not guilty, or in some instances, he may plead nolo contendere. This Latin term means "I do not wish to contend." While it differs technically from a plea of guilty, it sometimes carries the implication of guilt and may bring the same penalty since the accused has chosen not to defend himself.

Christian Science teaches the importance of defending one's thought against evil by rejecting evil suggestions as unreal and powerless to touch man made in the image of God. It denies the validity of any claim of error, regardless of the apparent evidence of the physical senses. Mary Baker Eddy, the Discoverer and Founder of Christian Science, writes in Science and Health with Key to the Scriptures, "When the body is supposed to say, 'I am sick,' never plead guilty." Later in the same paragraph she continues: "If you say, 'I am sick,' you plead guilty. Then your adversary will deliver you to the judge (mortal mind), and the judge will sentence you." Science and Health, p. 391; 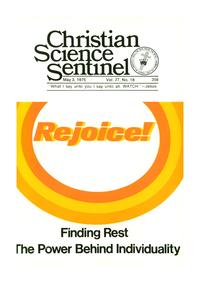